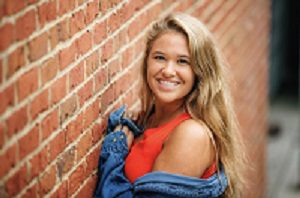 Each year the Central Ohio Chapter of the Penn State Alumni Association awards a scholarship to a deserving incoming freshman from the Central Ohio area. All funds in our scholarship account come directly from the support of local alumni and friends. The award is named after one of our most distinguished area alumni, Frank Ingram ’63 Med, ’66 DEd, who was the driving force behind its establishment in 1996.

The Central Ohio Chapter of The Penn State Alumni Association has awarded the group’s 2018 Franklyn Ingram Spirit Scholarship to Makinley Cramer. Cramer is a 2018 graduate of Granville High School and will attend Penn State’s University Park Campus. Makinley is the daughter of Tiera and Bryan Cramer. At Granville High School, Makinley was a member of the basketball and volleyball teams. She was involved in Student Council, Youth and Government, Varsity G Club, Latin Club, Interact and several theatre productions.

The scholarship is named in honor of the late Dr. Franklyn C. Ingram who earned his masters and doctorate degrees from Penn State. Dr. Ingram was a long time chapter member and a driving force behind the scholarship. Those wishing to contribute to the scholarship can find more information at the chapter’s website; psucolumbus.org.