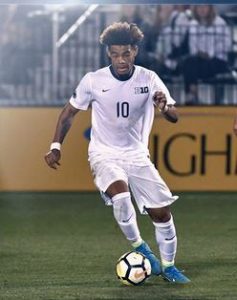 On Tuesday, September 12th, Penn State opens BIG10 play at Ohio State. The Nittany Lions open their 27th season as a member of the Big Ten Conference when they travel to Ohio State for a 6 pm match at Jesse Owens Memorial Stadium.

If you can’t make it to the game, you can watch the game live on the Big Ten Network or follow along with live stats at OhioStateBuckeyes.com.